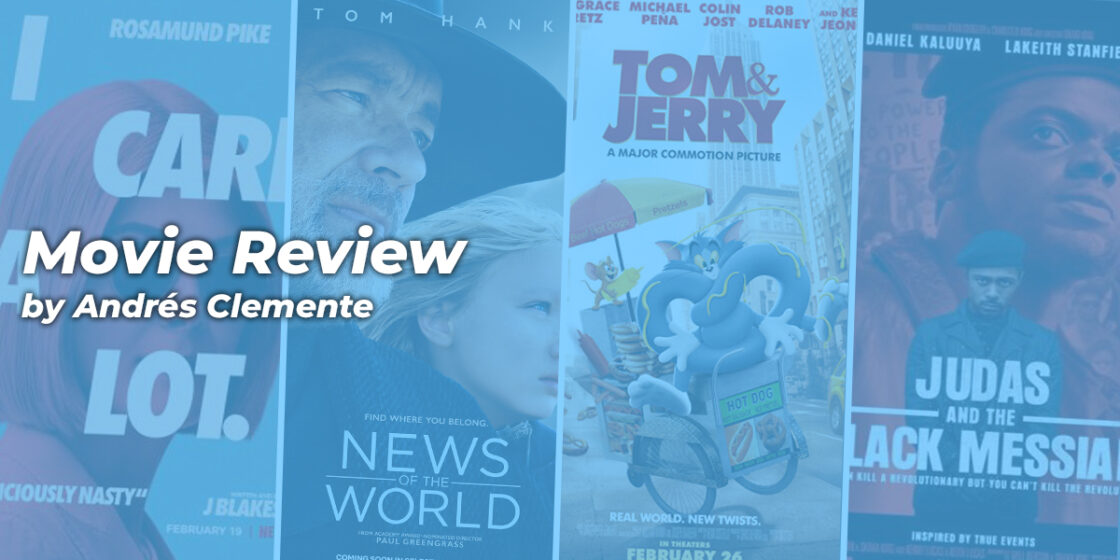 Plot: A Civil War veteran agrees to deliver a girl, taken by the Kiowa people years ago, to her aunt and uncle, against her will. They travel hundreds of miles and face grave dangers as they search for a place that either can call home.

The cinematography and production design are fantastic.

Thrilling chase scene through a mountain.

Keeping the language barrier between the characters makes the connection much more meaningful.

Amazing representation of a little known job in the Civil War era; also, unbelievable how little information people had access to during those times.

Movie drags and makes it feel like it takes forever.

The CGI effects take the audience out of the world created.

The third act is predictable and adds to the slow pace of the film.

No explanation on how he gets all the newspapers.

It’s great to finally see Tom Hanks not in a Bio pic or historical drama. He’s still one the best at his craft. News of the World is a slow western; it takes its time building the relationship and connection between its two main characters, and for this it relinquishes the outlaw and fast pace of the genre; I believe the film fits better in the road trip genre. At the end, it’s a fine piece of acting, but not a thrilling ride.

Plot: A crooked legal guardian who drains the savings of her elderly wards meets her match when a woman she tries to swindle turns out to be more than she first appears.

Peter Dinklage as a powerful mafia boss is terrifying, commanding and hilarious.

A thrilling “one-up” battle between Pike and Dinklage’s character

Chris Messina and Dianne Wiest are a welcome addition to the stellar cast.

Vibrant colors, that makes the story much lighter than it actually is.

No good guy in the entire film.

The manner in which Pike’s character survives and battles a mafia boss feels too easy or perfectly fitted.

The level of incompetence of the judicial system is taken to the extreme, and it diminishes the acceptance of story.

An incredibly dark comedy in which all characters are horrible people. It moves really nicely, the performances are accentuated to be on par with the bright colors, and the unpredictability makes the 2 hours incredibly fun. Great movie for a night at home.

Plot: Adaptation of the classic Hanna-Barbera property, which reveals how Tom and Jerry first meet and form their rivalry.

Michael Peña is the funniest character; he makes the film better in every frame he’s in.

Chloe Grace Moretz is charming as the lead.

With very little, Rob Delaney adds a lot of funny to the ensemble.

They gave Tom some actual motivation for chasing Jerry around.

The inclusion of Spike the dog into the mix.

Colin Jost is not great. Little chemistry with his romantic counterpart and lacks all the comic timing he shows as a Weekend Update anchor for SNL.

A barman character that is a waste of real estate, adds nothing to the story and is not funny.

The third act turns into a Muppet Movie moment that wastes a good character arc for its leads.

Recently we have seen many films about classic cartoons mixed with live action characters, and for the most part all of them are not good. Tom and Jerry exceeds expectations with keeping the 2D animation style of old, and creating really funny moments between the cartoons and live action characters. Standout by far is Terrence played by the hilarious Michael Peña. There are worse things you could watch with your kids.

4.- Judas and the Black Messiah

Daniel Kaaluya is magnetic. He’s portrayal of Fred Hampton is something to admire.

LaKeith Stanfield plays the ambiguous character of Will O’Neal perfectly, the audience can physically see him struggling with himself about his actions.

Jesse Plemons has become the next Philip Seymour Hoffman. An amazing character actor ready for the starring role.

The film moves nicely, whenever it starts feeling sluggish it pics it up with a harrowing gun fight between the panthers and police .

The love story between Fred Hampton and his fellow revolutionary sister adds to the characters humanity.

The film highlights the similarities of the 1970s in America with the times they are living today.

Very little of FBI agent Mitchell, played by Jesse Plemons. The audience sees him with doubt about the bureau’s strategy but it’s eventually downplayed.

A film that is completely told from 1 point of view.

A spy film told in a different way. It has incredible performances from its cast, a subject matter that is still relevant to this day, and a thrilling pace that keeps the audience listening to every word. A must see.

Plot: A director and his girlfriend’s relationship is tested after they return home from his movie premiere and await critics’ responses.

Great chemistry between Washignton and Zendaya

The back and forth dialogue keeps the audience invested in the relationship.

Very genuine building of a typical fight between a couple.

The continuous stop and go fighting can get tiresome.

John David Washington, even though he gives a really good performance, his character is stuck throughout the film in one emotion: egotistical defense.

Ending was going for ambiguous and unfinished (like most real life relationships and fights), but felt uninspired and lacking some closure.

Why is the bath water murky? Looks like she’s taking a milk bath.

It’s a film about people talking in a room, not for everyone, but it’s very much in my wheelhouse; I can’t get enough of emotional conversations between two characters, and all truths being completely out in the open. It does go on for longer than required and will probably exasperate many audience members. Very good date night movie, for a very secure couple.